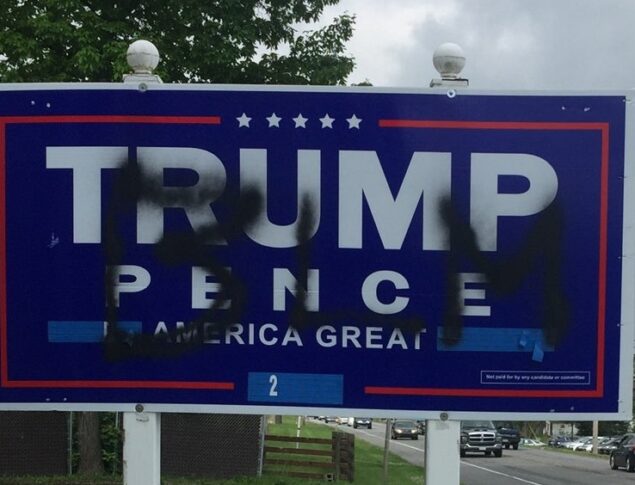 The liberal left evil empire – the violators of free speech and property – is not only alive in Seattle, Portland, and Minneapolis, but exists here in Carbon County as well.  Below is some of the damage done to our headquarters in April (when it was near McDonald’s on Blakeslee Boulevard).

Most recently, we have received numerous calls reporting yard signs taken from front yards.  Even our 4 x 8 sign at the Palmerton exit of Route 248 has disappeared. Trump/Pence signs are free at our headquarters, if you’d like one for your own yard. I’m sure our voters already know there is no need to steal them from other’s yards.

On Wednesday, September 16, a man traveling through Lehighton from his home near Philadelphia decided to damage our large signs at Bankway and Bridge Street.

With his box cutter, he cut the sign located on the property of Liberty Oil, and then he started working on the two signs across Bankway on the Castle Grill property.  One of our alert committee members, as well as the folks with the Trump trailer, observed and interrupted him, called the Lehighton police, and provided pictures of the license plate.  He will likely be charged with the crime and held responsible for the damage.

This is our message to the opposition:

President Donald J. Trump is taking care of business!  He is not, and will not, be hiding in a cellar.  Our President’s record of securing the borders, reducing taxes, removing burdensome regulations, restoring the most prosperous economy in history, and achieving the lowest unemployment rate since records have been kept, stands for itself.  It’s not a monument you can tear down or burn – it’s history. Get over it!

While you rely on vandalism and disgrace yourself, we will rely on our justice system and hold you accountable!

Committee members and supporters, keep up the work and continue campaigning to make America greater.